I decided at the inception of this project that I was going to use brushless servos instead of stepper motors, for all of the usual reasons – better power, speed and no possibility of losing position (skipped steps).  It’s a significant expense, since that class of motors starts at several hundred dollars apiece, but I’m taking the “buy once, cry once” approach on this.

There are two main contenders in the market that I’m personally aware of – Teknic and DMM Tech.  My inspiration to use servos started from videos from NYC CNC and other youtube channels, showcasing the performance of Teknic’s Clearpath SDSK servos – so to be honest, I didn’t really even give DMM Tech a second thought.  In fairness, on paper they do appear to offer very competitive motors, with potentially more power and positioning resolution for the money.  Still, the clearpath motor offerings more than cover my needs, and the approachability of the Teknic website, documentation and configuration software, and the ironclad return policy, all really helped lower the barrier to entry for me as a hobbyist.

(Note: I’m not in any way affiliated with Teknic – just a satisfied customer)

The range of Clearpath motors is broad – spanning different frame sizes (NEMA 23, NEMA 34, and on up), different motor body sizes within each frame size, and for any given size you can select from motors wound for higher speed, or higher torque, or somewhere in between.  Not being a mechanical engineer, or having firm requirements for the machine performance, my analysis was crude at best, but I settled on the following criteria:

This narrowed down my selection quite a bit, but I still needed to decide whether to go with a model biased for maximum torque (such as the CPM-SDSK-3421S-ELN), or more of a speed vs. torque compromise (such as the CPM-SDSK-3421P-ELN).  Not having the experience to settle it with a mechanical analysis, I took advantage of the Teknic guarantee and picked up a 3421P to test out – with which I did the following pseudoscientific test, running the motor on my partially-assembled X axis with a representative weight (35lb) attached to emulate the Z axis and spindle.

1250 IPM reflects what the 3421S-ELN is capable of, while 3000 IPM is the limit of the 3421P-ELN I was testing.  Long story short, while seeing it throw that weight around at 3000 IPM was seriously impressive, it seemed like serious overkill for how I would reasonably expect to run the machine.  More importantly though, I took a closer look at acceleration.  Consider that at very high rapids rates, it can take quite some distance to accelerate and decelerate – so for relatively short moves, on the order of a few inches, the machine may never even reach max velocity.  So for toolpaths without a lot of very long rapids moves, a higher-torque motor (capable of higher acceleration) can outperform one with higher max speed.

Conveniently, the interface software for Clearpath servos allows you to get a very good look into the performance of the motor in your real application, by allowing capture of parameters like torque, velocity and position error, plotting them on an oscilloscope-like display along with fault indications.  This made it easy to put the motor through its paces and look at how much margin it had.

Suffice it to say that when pushed to 3000 IPM, I had to dial back acceleration to around 0.4G to keep position tracking reliably in range.   At that acceleration rate, it took a move longer than a foot to even hit max velocity – which means that in real toolpaths, at least for the kinds of things I usually make, it would never get there.  This was enough to make up my mind – Teknic gladly RMA’ed the motor and exchanged it for the lower-speed, higher-torque 3421S.

With the new motor in hand, I resumed testing.  Here it is at 1000 IPM, 1G acceleration, +/- 10″ rapids moves.  Torque is not even close to saturating, position tracking error is well within range, and at these rates the max velocity is reached for moves as short as roughly 3 inches. 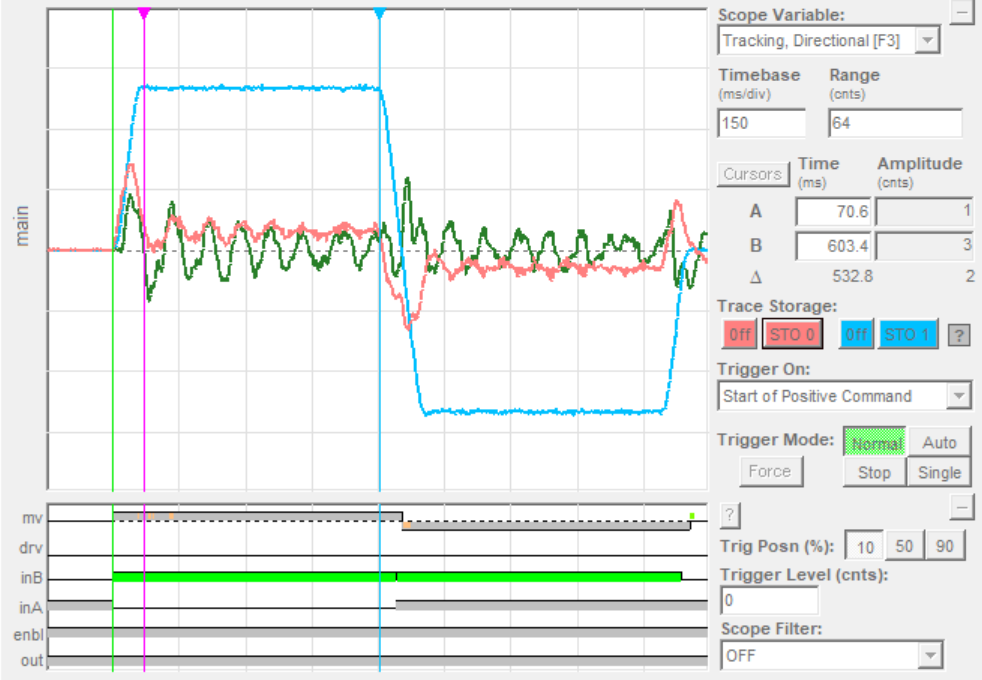 For a slightly more representative test, I ran it through a simple 2D adaptive toolpath, with only the X axis connected (Mach4 didn’t need to know that the other axes didn’t exist)

At that point, it was readily apparent that the machine needed to be on a really solid base – because that level of acceleration can be fairly violent.  At the time, the machine was still sitting on sawhorses – and through the course of the above testing the whole thing walked some distance across the floor.  So began the construction of a proper base – which I’ll cover in the next post.